One of the amazing things about agile approaches to software delivery is the level of empowerment afforded to development teams. But when those teams are part of a larger organization with cross-team dependencies and multiple business units to work with, alignment becomes super-important. This was the challenge facing the team at Wiggle.

Wiggle is an online sports retailer, selling cycle, run, swim, and outdoor equipment and apparel. They pride themselves on being trusted by over one million customers worldwide and encouraging people to be active in the great outdoors.

Having fast delivery teams was not enough; it was important to have clear visibility across the portfolio, alignment on priorities, and a common way of working that allowed teams to collaborate effectively.

There are no shortage of solutions touted: the Scaled Agile Framework is one and other approaches include the tribes model championed by Spotify. But what is right for Spotify is not necessarily right for other organizations and cultures. Wiggle’s teams were advocating different approaches, from traditional project approaches through Scrum and Kanban. Which was the right one, and how should it be deployed?

HotPMO met with the teams to explore how they worked and collaborated. Development processes were mapped from ideation through design, development and into production.

We advocated a Kanban model with a strong emphasis on work flowing through a series of highly visible process boards. The approach would mean that everyone could see immediately how work was progressing across multiple teams. It also helped visualise bottlenecks and allowed the Portfolio team to make priority calls armed with a good understanding of the associated impact on other in-flight work.

Big-bang transformations can be painful and hugely disruptive, so we championed an evolutionary approach. Firstly, we provided training to the software teams, and those who supported them. We helped them understand how Kanban works in theory and how it would be deployed at Wiggle. Coaching support was provided to teams to help with their transitions – with the people building software defining and optimising their process flows and feedback loops. Rather than mandating that teams moved from Scrum to Kanban immediately, the team’s existing ways of working were respected. Care was taken to create a path to Kanban working that minimised disruption, while encouraging teams to blend procedures and activities that were already working well for them, with new ways of working.

Large Kanban boards in the open-plan office became a focal point for conversations and decisions about priorities throughput. Bottlenecks became highly visible to everyone, which helped focus teams on addressing the issues and on smoothing out the bumps in the road. The evolutionary approach meant that in-flight work was not disrupted, and there was time for everyone to understand the changes that were being made and see the benefits in real time.

By putting an emphasis on coaching, self-help, feedback loops and training, we were able to put building blocks in place for continuous process improvement. Teams were trained to use tools such as cumulative flow diagrams and explicit policies to identify opportunities for process improvement long after the initial training sessions had been completed. 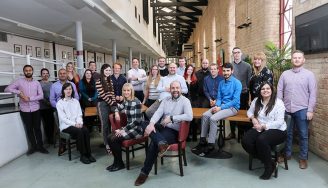