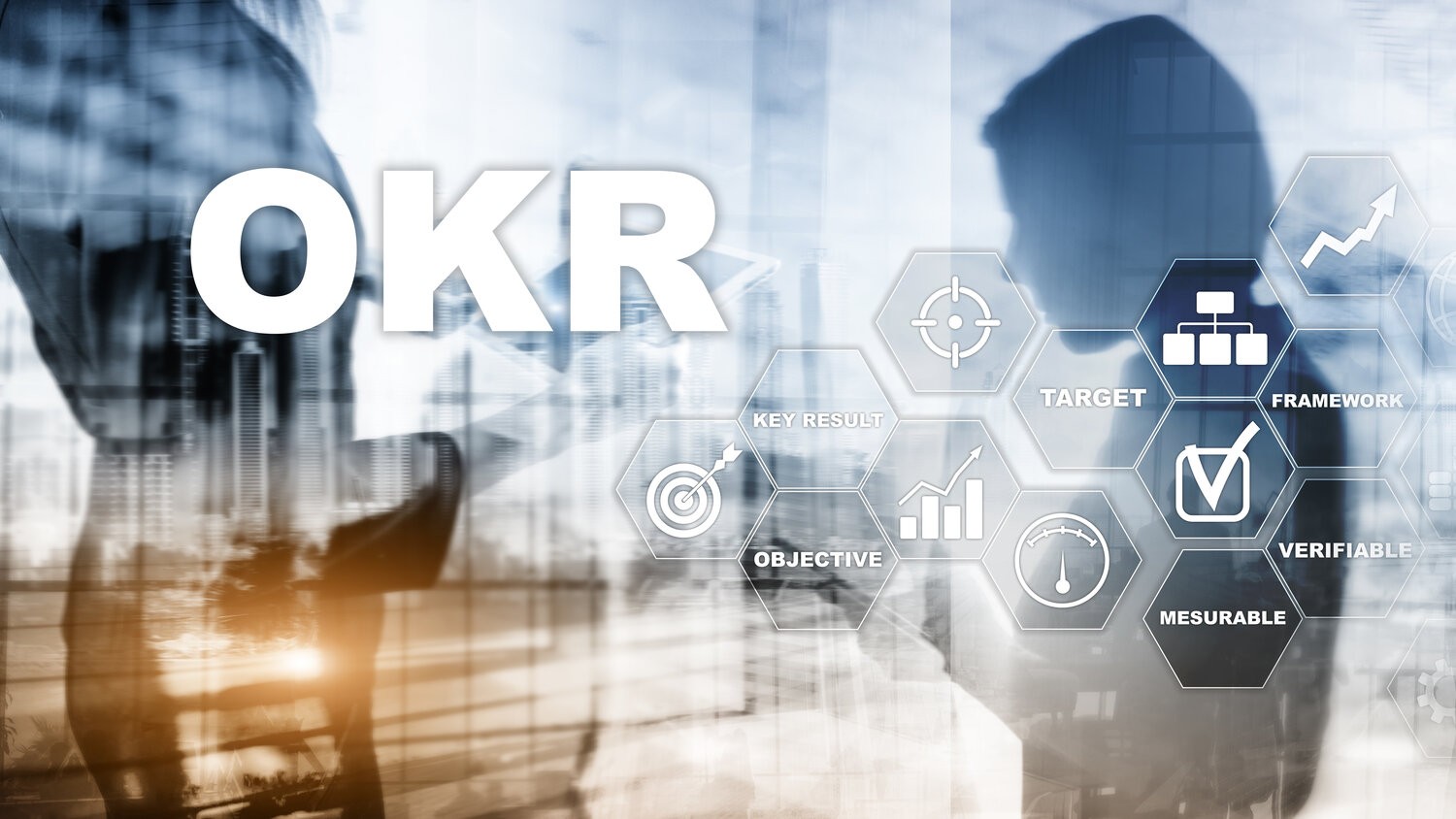 OKR is a goal-setting framework that is used by many large tech companies, including Google, Spotify, and Twitter. They are used to create alignment in an organization and to encourage people to set stretch goals. In this article, we explain what they are, how they are used and provide you an OKR example to help you understand the process.

What does the Acronym OKR stand for?

OKR is an acronym for Objectives & Key Results. Objectives outline a broad, qualitative goal designed to propel the organization forward in the desired direction. Simply put, it asks, “What do we want to do?” Objectives are supported by one or more Key Results – the measures of how well we have met our Objectives. The Objective is a qualitative statement, and the Key Results (KRs) are quantitative.

The History of OKRs 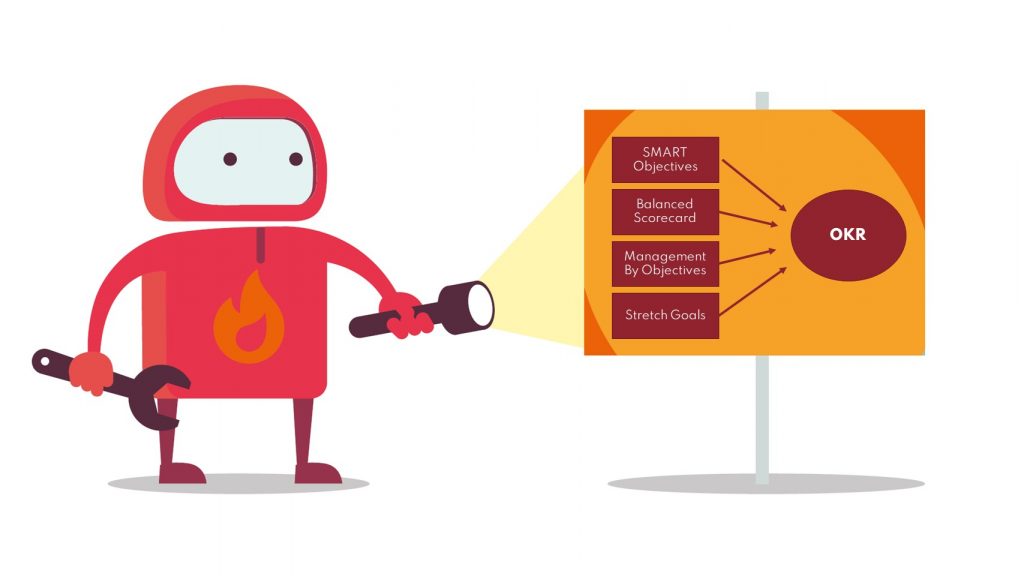 OKRs are a derivative of several different approaches to setting goals. Management by Objectives (MBO) was a system developed by Peter Drucker. MBO aimed to improve the performance of an organization by clearly defining objectives that are agreed to by both management and employees. Drucker believed that by ensuring employees had a say in goal-setting, organizations would see better participation and commitment, as well as alignment of objectives across the organization.

In 1981, George T. Doran defined the SMART acronym for setting goals. The simplicity of SMART has resulted in widespread adoption that has helped organizations set better objectives that were timebound and supported by measurable KPIs. This results-focused approach is a crucial element of the OKR model.

When Andy Grove was the CEO of Intel, he developed the OKR framework. Grove recognized the power of both Objective alignment across the organization (from MBO) and the importance of the KPIs to measure them (from SMART) and transformed them into what we recognize today as OKRs. He argued that a successful MBO system needed to answer just two questions:

Grove modified Drucker’s MBOs in two other significant ways. He suggested setting objectives and key results more frequently – quarterly, or even monthly – to keep pace with the modern, fast-paced industry. He also insisted that OKR should not be considered legal documents, or contracts, committing employees to achieve the goals. While OKRs would feed into performance reviews, they would be only one input factor. This was important as it paved the way for creating Objectives that could be ambitious – moon-shots, but without giving individuals the feeling that they were being set up to fail when performance reviews came around.

This concept of stretch was important to Grove. He wrote, “Objectives should be set at a point high enough so that even if the individual pushes himself hard, he will still only have a 50-50 chance of making them. The output will tend to be greater when everybody strives for a level of achievement beyond his immediate grasp, even though trying means failure half the time. Such goal-setting is essential if what you want is peak performance from yourself and your subordinates.”

While Andy Grove may have developed the OKR framework, it was John Doerr who was responsible for their proliferation outside of Intel. He introduced OKRs to Larry Page and Sergey Brin when they were working on their start-up company Google. He has continued to act as an evangelist for OKRs, encouraging many Silicon Valley companies to adopt them through his role in venture capital firm Kleiner, Perkins, Caulfield, and Byers.

Objectives are the ‘O’ of OKRs. The Objective is a qualitative statement that establishes a goal for a set period, usually a quarter. The OKR framework cautions against setting too many Objectives – between 1-3 is the recommendation. The objectives you set should be:

Key Results (KRs) are used to measure progress towards achieving our Objectives. They are Quantitative and are usually expressed as a percentage. The Key Results you set should be:

Importantly, Key Results should drive the right behavior. It is a truism that you get what you measure. As a PMO person, I have lost count of the number of times I have seen KPIs that were put in place with the best of intentions, yet end up driving behavior that harmed the organization. I worked in a call center once where customer service reps had a KPI around the length of calls. The target was that requests should be handled within six minutes. As a result, customers often found themselves mysteriously being cut off as their call approached the 6-minute mark, forcing them to call back and start the clock anew. When setting KRs, take a moment as a team to consider how they could drive negative behavior and, where this is a risk, ensure there are complimentary KRs that reduce the risk. In the example I gave about the call center, we could have added a customer satisfaction measure alongside the call handling metric – teams would be less tempted to cut customers off to hit one of their KRs if they knew it would have the inverse effect on the other KRs associated with the Objective.

The beauty of OKRs is that they encourage the setting of Bold, Challenging, Audacious Objectives that stretch and focus teams, while the KRs ensure teams can measure and celebrate even partial successes.

Can you give me an OKR example?

Enough of the theory – what do OKRs look like? I’ve created an example OKR that a PMO may set for itself. The Objective is a qualitative statement that gives readers a clear understanding of the direction the PMO is moving in. It is an Inspirational statement – who wouldn’t want to work in a PMO that people WANT to engage with?

Progress with our OKR is measured with five KRs. Crafting these should be a collaborative process involving the team. Each metric is progress-driven – the team can check progress throughout the quarter, rather than waiting until the end. They are specific, and each KR can be expressed as a percentage. For KR3, the team decided to specify a minimum attendance rate to avoid negative behavior. If the metric were simply to ‘Run three lunch ‘n’ learn sessions, it would be simple to run these and award 100%. But if no one turns up to the meetings, then the KR does not show that the PMO is putting on lunch ‘n’ learn sessions that those people genuinely want to engage with.

I talk about OKRs a lot, and one question that comes up often is, “What’s the difference between an OKR and a KPI?”. There is no significant completion here. They aren’t competing for disciplines. Rather than it being OKR vs. KPI, your organization is likely to have both in place. KPI stands for Key Performance Indicator. Organizations will usually have many of these to track the performance of products, SKUs, web page performance, sales, security, and so on. KPIs are typically defined by identifying a metric as being a vital lead or lag indicator for business success. Baseline data is gathered about the metric, and this then becomes the Key Performance Indicator. If performance varies from the expected result, the KPI is like a canary in a coal mine – it alerts the business to the variation and allows it to take action. Sometimes it may be a definite shift; other times, the company may be failing to hit the KPI and will need to take action.

KPI IS AN OPERATIONAL TOOL

KPI is excellent for keeping tabs on operational metrics that are important to the business. Organizations will often set up software to track these KPIs and issue alerts when they exceed variance. But they are not designed for objective setting.

OKR IS A CHANGE TOOL

By comparison, OKR is all about change. We deliberately set ourselves stretching objectives that change behaviors, systems, processes, and cultures within organizations. Unlike a KPI, the OKR puts an objective statement front and center, making it clear that we have a direction, and we know where we are going. We will know we have achieved our Objective when we see the dials turn on our KRs. You may find that some of your operational KPIs are used as KRs for some business objectives. This is perfectly normal! Once the Objective has been achieved, the OKR is finished. But the metric we are tracking will usually continue to be monitored by the business as an operational KPI long after the OKR has been retired.

Where can I go to find out more?

Take a look at our article A Journey through OKR, which links the concept of OKR to the Tokyo Olympic Games 2020 and provides advice for using OKRs in Portfolio Project Management. Link>>

Here are some useful resources for finding out more about OKRs:

Use DMAIC to improve your project processes

Kelly’s 14 Project Management Rules: Everything You Need To Know