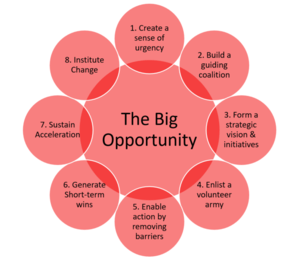 John P. Kotter’s works have made his name is synonymous with change. Kotter, a Harvard Emeritus Professor, speaker and author has committed a great deal to the study of leadership and change over the years. His 8 step model is taught on all the leading business schools and is practically a religion among some of the big consultancies.

Kotter is the author of 20 books on the subject of leadership and change. Twelve of these have been business bestsellers and two were overall New York Times bestsellers

When researching his model, Kotter studied over 100 companies who were going through some kind of significant change. His research identified eight common errors that were made during change programs. In order, they are:

To mitigate these common errors, Kotter advocated an 8-step model as follows:

However, he reviewed and refined the model in 2014 and released a new version, shown in the diagram below: 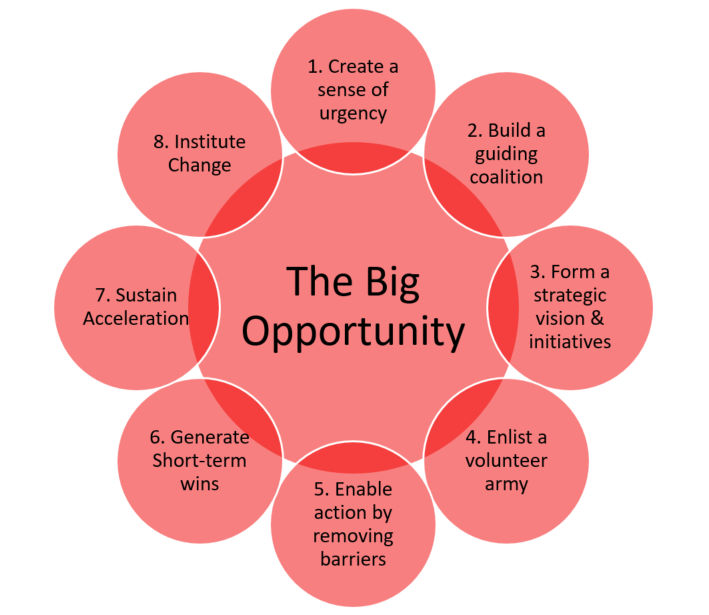 CLCK TO DOWNLOAD AN EDITABLE POWERPOINT VERSION OF THIS DIAGRAM

The updated version of Kotter’s model resolves one of the major criticisms of the 1996 model. The original was a sequential model that followed a strict waterfall approach. In today’s fast-moving world (indeed, even in back in 1996) it seems absurd that a team should wait for the Vision to be shared with the whole organization, before moving on to empower people and start thinking about quick-wins.

In the 2014 update, Kotter advocates running the 8-steps concurrently and continuously, and the model is flexible enough for even the most flexible of organizational structures. Continuing to refer to the 8 focus areas as ‘steps’ feels like a missed opportunity to reinforce the need for continuous improvement. Steps is a very waterfall term. But, that criticism aside, the new model has a lot going for it. So lets take a look at the steps in more detail:

When to use Kotter’s Eight Step Change Model

The 8-step model is suitable for any significant change initiative. For PMO professionals, the model is a good one to use for setting up the PMO from scratch, or turning around a failing PMO.

You may also find yourselves advocating this approach on significant change projects or transformations within your organization or supply chain.

*Note, these links relate to the original 8-step model, not the 2014 update.

The DNA of Strategy Execution / DANCE