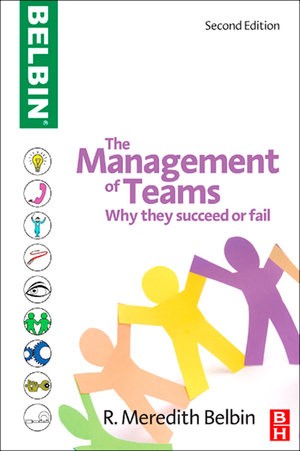 Meredith Belbin is a management theorist best known for his work with management teams. He studied Classics and Psychology in the UK at Clare College, Cambridge. He served as a research fellow at Cranfield University before joining Henley Management College. He carried out extensive research on group behavior, which formed the basis of his 1981 book Management Teams: Why they succeed or fail.

Belbin derived the concept of eight (and later nine) team distinct and interdependent team roles from his study of teams competing in business games.

He describes a team role as ‘a tendency to behave, contribute and interrelate with others in a particular way’. He asserts that for teams to be successful, a team and its members need to fulfill nine roles:

Whilst there are nine roles, this does not infer the ideal team size is nine. Belbin argues that the optimum size for a team is four people. Members of a team will frequently play more than one of the team roles.

According to the model, just as each role has its strengths, it also has weaknesses. The model identifies and describes what it calls ‘Allowable Weaknesses’ for each role. Each of the roles, its strengths, and weaknesses are outlined below:

Plants are highly creative and good at solving problems in unconventional ways. If it is innovative ideas you are after,  a Plant is a good person to ask. Good plants are imaginative and free-thinking. However, they are prone to ignore details and may be too preoccupied to communicate effectively. The Plant might be caricatured as the absent-minded professor/inventor and often has a hard time communicating ideas to others. Multiple Plants in a team can lead to misunderstandings, as many ideas are generated without sufficient discernment or the impetus to follow the ideas through to action. Plants can also create problems with the timing of their ideas. The fact that the team has decided on a valid way forward and is now in the implementation stage will not stop the Plant from coming up with new solutions and disrupting the implementation process.

Monitor Evaluators are fair and logical observers and judges of what is going on in the team. Since they are good at detaching themselves from bias, they often see all available options with the greatest clarity and impartiality. They take a broad view when problem-solving, and by moving slowly and analytically, they will almost always come to the right decision. However, they can become very critical, damping enthusiasm for anything without logical grounds, and they have a hard time inspiring themselves or others to be passionate about their work.

Specialists are passionate about learning in their particular field. As a result, they are likely to be a fountain of knowledge and will enjoy imparting this knowledge to others. They also strive to improve and build upon their expertise. If there is anything they do not know the answer to, they will happily go and find out. Specialists bring a high level of concentration, ability, and skill in their discipline to the team but can only contribute to that specialism and tend to be uninterested in anything that lies outside its narrow confines.

The Shaper is a task-focused individual who pursues objectives with vigor and who is driven by tremendous energy and the need to achieve. For the Shaper, winning is the name of the game. The Shaper provides the necessary drive to ensure that the team is kept moving and does not lose focus or momentum. Shapers are people who challenge the team to improve. They are dynamic and usually extroverted people who enjoy stimulating others, questioning norms, and finding the best approaches for solving problems. The Shaper is the one who shakes things up to make sure that all possibilities are considered and that the team does not become complacent. Shapers could risk becoming aggressive and bad-humored in their attempts to get things done. Shapers often see obstacles as exciting challenges, and they tend to have the courage to push on when others feel like quitting.

The Implementer takes their colleagues’ suggestions and ideas and turns them into positive action. They are efficient and self-disciplined and can always be relied on to deliver on time. They are motivated by their loyalty to the team or company, which means that they will often take on jobs everyone else avoids or dislikes. However, they may be seen as closed-minded and inflexible since they will often have difficulty deviating from their well-thought-out plans, especially if such a deviation compromises efficiency or threatens well-established practices.

The Completer Finisher is a perfectionist and will often go the extra mile to make sure everything is “just right,” and the things he or she delivers can be trusted to have been double-checked and then checked again. The Completer Finisher has a strong inward sense of the need for accuracy and sets his or her high standards rather than working on the encouragement of others. They may frustrate their teammates by worrying excessively about minor details and by refusing to delegate tasks that they do not trust anyone else to perform.

A Coordinator is a likely candidate for the chairperson of a team since they have a talent for stepping back to see the big picture. Coordinators are confident, stable, and mature, and because they recognize abilities in others, they are very good at delegating tasks to the right person for the job. The Coordinator clarifies decisions, helping everyone else focus on their tasks. Coordinators are sometimes perceived to be manipulative and will tend to delegate all work, leaving nothing but the delegating for them to do.

A Team worker is a lubricant between the cogs who keeps the machine that is the team running smoothly. They are good listeners and diplomats, talented at smoothing over conflicts and helping parties understand one another without becoming confrontational. Since the role can be a low-profile one, the beneficial effect of a Team worker can go unnoticed and unappreciated until they are absent, when the team begins to argue, and small but important things cease to happen. Because of an unwillingness to take sides, a Team worker may not be able to take decisive action when it’s needed.

The Resource Investigator gives a team a rush of enthusiasm at the start of the project by vigorously pursuing contacts and opportunities. He or she is focused outside the team and has a finger firmly on the pulse of the outside world. Where a Plant creates new ideas, a Resource Investigator will quite happily appropriate them from other companies or people. A good Resource Investigator is a maker of possibilities and an excellent networker but tends to lose momentum towards the end of a project and has a tendency to forget to follow things up.

Here’s the man himself, extracted from the film Fire, Toast and Teamwork. The film comes with a facilitator’s guide full of exercises to use alongside the film. You can purchase the film from www.belbin.com.

When to use Team Roles

Team Roles are used for identifying behavioral strengths and weaknesses in a team setting. It can help teams who are forming to understand the roles they could play in the team and the roles of their colleagues. The model can also be used as a tool to assist teams who are struggling to communicate and perform. Such teams can find that applying a standard model and using the lexicon of Belbin can help them communicate and work together with greater understanding and respect. Exploring team roles can be an interesting and enlightening conversation in agile retrospectives or team-building events as the focus is drawn to roles and away from individual personalities. You can download the self-perception inventory using the link at the bottom of this page, share it with the team and allow them to reflect on how they function as a team and derive learning for the future.

For team managers and scrum-masters, it can be useful to understand the model to create balance and synergy amongst the team. Understanding the allowable weaknesses can also help explain behavior and identify coaching opportunities.

It is worth noting that this is a behavior measurement tool – not a measure of personality types. Personality traits are usually considered by psychologists to be fairly consistent. By contrast, behaviors change according to the environment. Therefore, whilst the model is useful for analyzing a team (or helping a team analyze themselves), it is not an appropriate tool for recruitment and forming teams of individuals from different environments. Using the model as a basis for shaping an optimal project team or Scrum team is unlikely to succeed because individuals will adapt their behavior to the new team dynamic, often in ways that are difficult to predict!

Use DMAIC to improve your project processes

Kelly’s 14 Project Management Rules: Everything You Need To Know