My phone squawked this morning. It was a message telling me that three of my Project Managers were on holiday, one was visiting a different office, and one was sick. This kind of information is useful for PMOs. I started to make a mental note of the teams that I would reach out to during the day  – making sure they had a good support network in place even while their PMs were on leave.

The information was relayed to me via one of our company’s more popular messaging systems: Slack. And the message came from a Bot user called Holly (short for Holidays-Bot, in case you were wondering!). Holly was tasked with querying our HR system, finding out whether any of our team were on leave, and sending a consolidated update back to the team every morning. 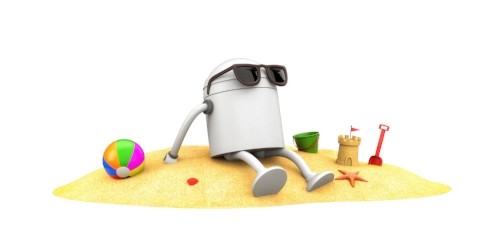 On Slack, Holly has a name, a profile and a picture. You can interact with her, and she understands basic requests. And Holly is a valuable member of the team. With Holly’s help, we always know who is where without having to rely on people setting out of office agents and the like. Holly is, in fact, a short piece of code that resides on one of our servers and connects with both the HR system (to ask questions) and to Slack (to receive requests and to share information. Our Holiday-Bot takes a repeatable mundane task and runs with it – freeing up valuable time for other members of the team

Holly isn’t our only bot. We have GlossBot too. GlossBot maintains a glossary of terms common in our organization and responds to requests with definitions. Can’t remember what BOSCARD stands for? A quick question to GlossBot, and it responds, telling you that BOSCARD is an acronym used for creating terms of reference – Background; Objectives; Scope; Constraints; Assumptions; Risks; Dependencies (in case you were wondering!).

Thanks to the growing number of CRM systems with API interfaces and messaging systems such as Slack that positively embrace the use of bots, more and more simple tasks can be automated. As well as letting me know whether my team is in the office, bots can quickly tell PMO Managers which milestones are due (or overdue) and whether Project Managers have updated their risk logs recently. They can help the Project Managers too by completing routine activities such as diligently contacting task owners, finding out whether tasks have been completed, and updating master-plans accordingly.

Too much of the PMO role is taken up with manually gathering and communicating information between the various roles and stakeholders. This effort often derives from the need to fill information gaps within projects, and within the organization. The process of gathering and disseminating said information is labor-intensive. It often means PMO analysts end up getting stuck in a rut of working on low-level, repetitive tasks.

If that were not bad enough, the information that is gathered relies heavily on the human intervention that can lead to errors or bias. Slow and inaccurate processes soon leave Project teams and Stakeholders end up feeling frustrated. Soon they start to view the PMO as a blocker, rather than an enabler.

It doesn’t have to be that way. Effective use of bots can reduce administrative overhead and turbo-charge the Projects Portfolio.

PMOs are full of processes that scream out for automation. Historically, automating such tasks has been cost-prohibitive because of the temporary nature of projects. Whilst the projects may be temporary, the Projects Portfolio is not.

The typical PMO team will have hundreds of small, routine tasks that could easily be handed off to a bot. Tasks such as checking for missing documents, making sure metadata is up to date, and chasing overdue reports are easy to delegate to an automated script or bot.

Furthermore, the enlightened Portfolio PMO will understand that there are a number of common processes that are used for or accessed by a wide range of Projects. Processes such as booking meetings, creating task lists, tracking actions are common to all projects. Software projects may have routine processes such as creating Git Repos, building out test environments, and running tests. Time can be saved (and quality can be increased) by using workflow automation software to automate these tasks.

Robotic process automation (RPA) solutions such as UiPath, Pega, and Blue Prism allow bots to be created that can either work alongside humans (attended bots) or independently (unattended bots). Attended bots are useful for repetitive tasks that require a high degree of accuracy, and take up a lot of time for PMO analysts. Time savings in basic processes of 30% are typical, with more considerable savings achieved for more complicated procedures.

Unattended bots can run 24×7, handling large backlogs of work from queues in contact center systems, CRM, or PPM tools. They can be used for setting up systems access for people working on projects, finance reconciliation, and the PMO favorite – chasing and checking the quality of timesheets.

Automation is a KPI that your PMO should be tracking.

With this in mind, I recommend adding a new metric to your PMO KPIs – % automated processes. If like me, you believe the role of the PMO is to be a catalyst for the business, then you should be aiming to grow that metric month-on-month – freeing up valuable ‘human-hours’ to focus on making the business run faster.

Want to know more about RPA and Automation?

This is just the tip of the iceberg. If you want to know more about the use of Automation tools in the PMO, take a look at these articles on the subject: